I have been such a slacker lately and haven't posted on the blog nor have I been reading other blogs which really stinks because it gives me such a great feeling to stay in touch with my blogger friends and to keep up with what's going on. I just recently found out that the reason that I am so unmotivated and feel like hell, can't sleep at night and having a hard time staying awake during the day is because my depression has snuck up on me again and the meds that I was taking stopped working for me. My psychiatrist changed my meds around and put me on Risperdal. I know that there are several kiddos on it for behavior issues and I didn't realize that it was also used for Bipolar Disorder also. I have been on it for about 2 weeks and it hasn't helped yet which is really quite frustrating because I was doing so well before this depression started to get the best of me. I think that perhaps I may be one of the lucky ones in that it hasn't caused my appetite to increase so far and I am thrilled with that. I have been going to the gym to workout and it just wipes me out for days even though I am taking it easy and some days I only walk on the treadmill it stills kicks my butt and it takes me a couple of days to recover from only 15 - 20 minute walk. I am hanging in there with a positive perspective and with hopes of feeling better real soon.

I posted some time ago , right after we had moved to S.C., about Griffin's bus driver using her personal cell phone while she was driving and how unhappy I was about it and how I made phone calls to everyone I could possibly get in touch with about this. The response that I got was that it wasn't part of their policy to allow that to happen but nothing was ever done about it. Back then I didn't have a car so I had no choice but to let him ride the bus but now that I have a car I do not plan on letting Griffin ever ride the bus again because I am concerned about his safety. The reason why I mentioned this is because a reporter/anchor for a television station a few hours away from here contacted me through this blog. She is doing a story on the dangers of bus drivers talking on cell phones while driving and asked me if I would like to do an interview about it. I was happy to be interviewed and to help her take the information that she has gathered to the state legislators in order to make it illegal for bus drivers to use their cell phones while driving our children. I hope that the interview made some difference and will help to spread the word that it is going on and create awareness throughout the state. She had informed me that there are only 13 states where it is actually illegal. I was not surprised that this state was not one of them. South Carolina is so concerned about people having alcohol on Sundays and people missing church on Sundays because they might want to go shopping it is absurd! How can it be that such issues are far more important than the safety of our children. I am not going to spend too much time writing about this but I will keep the blog updated as the story is aired and once I learn more from her about how it is going at the state level. I also need to get to bed but first I want to brag about my wonderful little guy.

Griffin is doing awesome at school and at home and in his therapies (Speech, O.T., and in his swimming). His speech and language are progressing at an amazing rate and his handwriting and spelling is phenomenal. I am so proud of his progress and to top it all off he seems to really enjoy learning and even doing his homework. His teacher is wonderful and ever so organized and really seems to love what she is doing. Griffin is once again a happy camper as he used to be when he was in Anchorage. He has come a long way and has adjusted to this environment quite well and is having far fewer meltdowns than when we first got here. I will do my best to stay on top of things and to let you all know what's going on with us.
Posted by Lora at 8:39 PM 8 comments: Links to this post 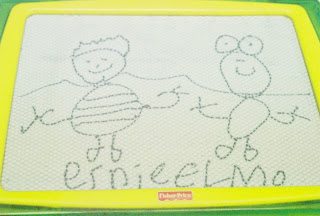 This is Griffin's most recent piece, it is Ernie and Elmo swimming in the bath tub as he has described it to me. Griffin didn't forget the details of what it takes to make each one unique like Ernie's striped shirt and Elmo's eyes on the top of his head. I think that it is a great artistic endeavor. He never ceases to amaze me.

So, Griffin is doing very well in school and loves going and often does not want to leave at the end of the day. His teacher told me that he is doing so well with his potty training that she believes that he is ready to wear big boy underwear during the day at school. I am thrilled with this news of course but if only he would do the same for me at home. She said that he was even asking to use the potty! At home he flatly refuses to go to the bathroom most all the time. I have a great deal of support and some ideas that might just prove to work out after all, I will keep you updated as things transpire.

I go out every day to run errands or to go shopping in my wonderful car which I am so very grateful for, I feel so blessed with all the gifts that I have received through the power of positive thinking and believing that I will get all that I wish for as long as I believe. This is what I have found to be true because I have learned so much through The Secret, I just recently listened to the audio book and it left me feeling empowered and inspired to go after all that I want and need. I have already received much of what I have wished for which makes me even more confident that the rest is on its way, it's just a matter of time.

The weather has been pretty good lately and not so unbearably hot and humid so that makes each day much easier to tolerate, or it could be that I am becoming more acclimated.
Posted by Lora at 8:49 AM 5 comments: Links to this post