I was so inspired by this movie and greatly appreciated that it featured children from all over the spectrum and didn't focus on what they could not do but instead showed the gifts that each and every one had. I am sure that it took a great deal of hard work to put it all together but I found it to be reassuring and comforting to know that other parents go through the same intense emotions that I do and that we all share the same fears for our children's future.

If you do nothing else today please watch this film to the end and I feel certain that you will have a great big smile on your face and your heart will feel that much bigger and you may end up with a few tears in your eyes. I don't know how long HBO will make this film available online so watch it now and do not hesitate or put it off until another time, films like this simply do not come along often.

Griffin is feeling waaaaay better and has his happy camper smile and laughter going again and I am so very happy. For some reason he woke up at 2:00 a.m. and couldn't or wouldn't go back to sleep. I did my very best to stay awake but the medicine that I take for sleep made it exceptionally difficult to not doze off, I struggled to remain alert and to be aware of what was going on, Griffin always stays in the bedroom with me when he gets up like this and he is constantly attempting to rouse me and get me to wake up enough to carry on conversation with him. I finally got up for good at 5:00 and was able to get Griffin to snuggle with me and we watched the Sprout channel, he kept telling me jokes, and we ate some cereal together. Literally all day long Griffin showed no signs whatsoever of being fatigued and went to sleep tonight at about 8:30. We had a wonderful day even without going outside of the house, it was just a lazy day with lots of laughter and snuggling (which is my all time favorite thing to do with him). I am so very fortunate that he is affectionate and I hope that for us that never changes.

If it doesn't rain this weekend then I plan to take Griffin to the park or parking lot of his school so that he can ride his bike and get some much needed exercise........for both of us. Have a beautiful weekend and don't forget to watch the movie, in fact, watch it with your loved ones and send the link to everyone you know whether they understand autism or not they will get a glimpse into what you experience in your life both alone and with your child and even with your partner/spouse. 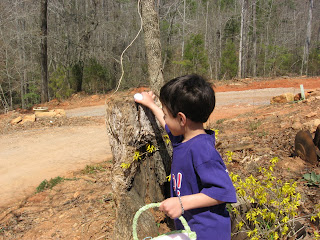 I just found out yesterday that Griffin has strep once again!! I didn't even know that he was sick because he never complained once about his throat or anything else hurting whatsoever. I was taking him to see the doctor because he has sleep apnea and he snores quite loudly seeming to not have quality sleep at all, also he has been having behavior issues at school which I now know is most likely because he was feeling so bad. Just to err on the side of caution, I asked for a referral to a ENT so that we can find out if he is having any problems with his adnoids/tonsils because he has been snoring for around a year or so and his sleep apnea is getting worse with time. It may be that he is going to school tired since he may not be getting quality sleep. Between Griffin having strep and also having ear problems I am beginning to think that if the doctor (ENT) recommends that he have his tonsils or adnoids out that it might be best because I hate for him to keep on taking antibiotics besides, it is nearly impossible to get him to take his meds because it is so challenging to get the medicine in food without him tasting it. Each time that he has gotten a bacterial infection he absolutely refused to take his medicine and he ended up having to get the Rosephin shots which is not a good thing because I don't want him to compromise his immune system and have drug resistant bacteria. I am and never have been a big fan of antibiotics in the first place but I truly doubt that I could get him to take the herbs that I take for infection.

Griffin has been talking a lot more at home but a good bit of it is difficult to understand and something really cool that he has been doing is that he loves to tell jokes that he has made up all on his own. Often he will start laughing before he gets out his punch line........he is so adorable. Lately I have noticed that Griffin is using words to describe how he feels and he is using the words appropriately to express himself which is quite significant for him. Even though he is having behavior issues at school he has been doing pretty well at home and out in public with only a few meltdowns per month.........what a great relief!

My sweet and loving little guy still wants a kitty because he misses our kitty that we had in Alaska "Pisgah" who now lives with my dear friend who still resides there. Almost daily he asks if we can go to the animal shelter to get a kitty and it breaks my heart to have to tell him that we cannot (because my dad won't allow it) but that maybe in the future we can do that. He is such an affectionate little guy and I count my blessings each and everyday.

Have a great day everyone!
Posted by Lora at 7:21 AM 2 comments: Links to this post

Just a quick entry to let everyone know that I had an awesome time in Seattle with my very special friends but at the same time I am absolutely elated that I am back home with my special little guy who I missed tremendously.

Everything is going well although Griffin said his ear is popping and I just hope that it doesn't mean that he is about to have another ear infection. He was exceptionally mellow yesterday during speech and OT and also this morning so I am concerned that he is not feeling well.

I haven't transferred the pics from my trip yet but as soon as I do I will post them so you can see a bit of what we did and see how much fun we were having.

I will write again soon, I hope that you all are doing well and having a great day!
Posted by Lora at 9:20 AM 2 comments: Links to this post