On a Hot Summer Day 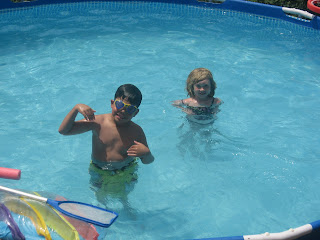 I had a great birthday on the 29th. My friends surprised me with a cake, flowers, and we had pizza which Griffin devoured. Got to watch him and the eating, he is in the 95 percentile for his age and those love handles aren't going to go away on their own. Think that I am going to take him off of sugar again, shouldn't have put him back on it in the first place! Trying to change the diet off of so many carbs and getting him to eat healthier with more fruits and vegies......wish me luck! He doesn't get much exercise so we've got to change something. I will not have a child who is obese! That means risking meltdowns at the grocery store and saying NO more often and that is going to be lots of fun....F U N ! All by myself in the store dealing with an 80 lb. child having a full-on meltdown just imagine the scenario if you will or if you have an autistic child you know what I mean or if you are a single parent of an autistic child you know what I mean.
Posted by Lora at 9:41 AM 4 comments: Links to this post 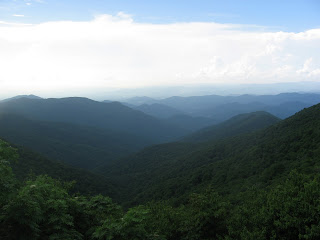 I've been dying to put up this photo of the awesome Blue Ridge Mountains which I took while Griffin was at camp. Isn't it just gorgeous? I am so blessed to live in such beautiful country, I would say almost as beautiful as Alaska, but in its own kind of way.


Griffin and I have been hanging out with our neighbor Nikki who is a joy to be around, actually Griffin adores her. All he wants to do is to see Nikki all the time. She is very animated and gives him lots of attention so of course he loves it. I will write more at a later time as it is very late right now and I need to try to get some sleep.
Here is a photo of Nikki and Griffin at the lake where we go to feed the geese and the ducks, one of our favorite pastimes: 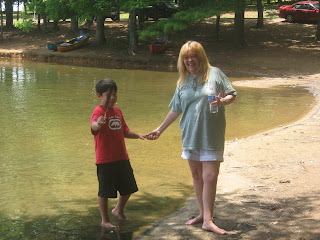 I believe that Griffin is holding up a feather that he had found. The water was not cool and refreshing as they had hoped for but it was fun to get their feet wet anyhow.
Posted by Lora at 2:43 AM 1 comment: Links to this post

What a Beautiful Day! 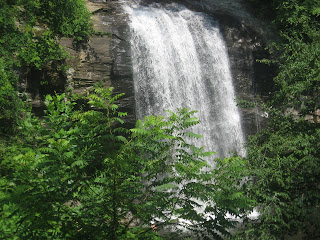 A day to remember indeed! First we went to Looking Glass Falls but weren't bold enough to make the trek with Abby in tow down to the bottom of the falls to the river. But we did go further down the river to where it was nice and shallow where Griffin could safely swim in the water and boy did he love it! Of course it was icy cold but he didn't mind a bit as he submerged his entire body into the water swimming around like a little minnow. He wasn't into getting his head wet because he didn't have his goggles, he never puts his head into water...not even the bathtub or shower without his goggles. But he did have a great time anyhow and I had a great time watching him. Abby got her feet wet and lapped up lots of cold water. Griffin's Uncle Charlie, whose birthday was today, got into the water with him and they both looked for shiny and glittery rocks.

It was a relaxing day all in all and I am so glad that we made the trip. It is one of my favorite places to go to as I have fond memories from my childhood of Pisgah National Forest. It was a bit of a trip but well worth it. It was nice and shady there and a nice break from the summer sun, although there were lots of cars along the road but we did manage to find a great parking space. Next time we go we are going to go to the fish hatchery where I think that Griffin will absolutely love to see all the little fishies!
Posted by Lora at 7:51 PM 2 comments: Links to this post