It's All About Relaxation

Griffin has calmed down considerably and his meltdowns have decreased in numbers and intensity thank goodness. His OT has taught me a trick to ask him "How is your engine running?" when he begins to get upset and that is his cue to begin to take measures to calm himself down with deep breathing. He knows that his engine can either be running too high, just right, or too low. If it is too low then he can run around or jump on a trampoline to rev up his engine and if it is just right then he know that there is nothing he needs to do. So, lately it has been working for me to ask him and he has been self-regulating no matter where we are even in Wal-Mart. I do forget to ask him when his engine is running "just right" or "too low" and do confess that I need to work on that. There are times when he is only sitting either at the computer or telling me that he is bored when I should ask him how his engine is running. Note to self: Ask Griffin how his engine is running more often.

I am praying for my Aunt Patty who is undergoing chemo for stage 4 cancer and wish that I could be with her so that I could give her hugs and show her my support. I wish that she could meet Griffin because I know that she would fall in love with him and that he would bring such delight to her. My parents are with her now which I am grateful for because she needs the support. Even if Griffin and I had the money to go it wouldn't be possible to go because we are having car problems and I don't think that Griffin would tolerate such a long road trip. I guess that we would have to fly but the last time we did that he didn't do well either. Travel is so hard, I think, for autistic individuals because it is so unpredictable besides the security check is hard enough let alone the rest of it!

I took Griffin to the doctor because he has been complaining of a stomachache and the doctor said that it is anxiety, Griffin agreed that he had been nervous. So, I made an appointment with a new psychologist to address the issues that have been bothering Griffin. I am not quite sure exactly what all is going on with him as he is not telling me the whole story. He does tell me some abstract things that don't really make sense but nothing concrete that I could change. I am hoping that if I leave the room that he will tell the doctor what is bothering him.

I am still having an issue with Griffin coming into my bed in the middle of the night because he says that his TV scares him. So, I removed the TV and he continued to do it. I told him that 5th graders do not sleep with their mothers and that didn't work. I have tried taking away privileges and that didn't work. He is afraid and I have tried to alleviate his fears but I am not a professional so I don't know what to say. Sometimes he doesn't even know what he is afraid of he is just afraid but then I wonder if he is just holding on to me and afraid of growing up. This is why I need a doctor!
Posted by Lora at 1:40 PM 2 comments: Links to this post

How Our Summer is Going

I haven't been on the computer much since school has been out, Griffin spends time on it mostly, I am on the Android sending out e-mail and on Facebook when I do something while on the couch resting my foot and knee. I just found out that I have a torn meniscus in my left knee that I do not know how I injured unless it was when I was in the wheelchair. Anyhow, I have been hobbling around like a little old lady in a lot of pain and trying to do as much as I can with Griffin but at the same time I have to take it easy on my foot too still. I went to see my foot doc and he told me that it was still too early to not take into consideration the fact that I had major surgery on it only 3 months ago and that it was normal to still be on pain meds.

Griffin is not so violent with his meltdowns but they are still frequent even though I am giving him fair warning of what we are doing ahead of time and we are in a routine. We do things the same every day except for appointment days but those are not necessarily the days he has the meltdowns.

I am tired. I will write more another night that I stay up late and have access to the computer again LOL! I do miss reading my dear friend's blogs but it really is uncomfortable to sit here because it makes my foot throb.

Scroll Down for Post, These Are Just Beautiful Photos 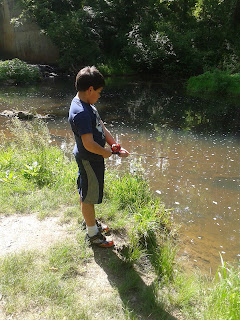 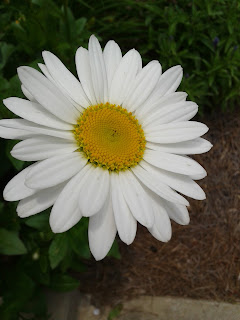 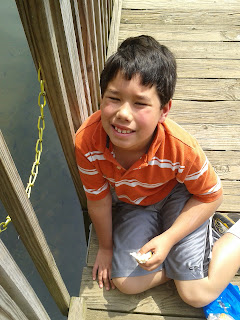 Posted by Lora at 4:11 PM No comments: Links to this post 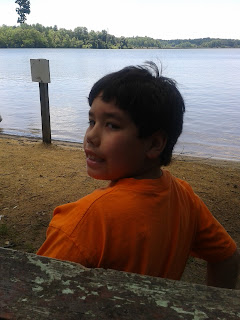 Griffin has been having violent outbursts lately and it concerns me especially since summer is here and we are spending all of our time together, I think it is time to see his developmental pediatrician to adjust his Abilify. There hasn't been a change in it for 5 years so I think that maybe it is time that we revisit it.

We just went to see his neurologist about the Clonidine for sleep and for his tics and he said that I could increase his meds as needed up to 2 1/2 for now and then he we will start seeing Griffin's developmental pediatrician for now on about that med, there's no need to see so many doctors when Griffin is really doing fine. His tics have gone away for now, I think the anxiety about the bullies had a lot to do with it.

Aunt Patty I want to say that Griffin and I look forward to seeing you and the whole family and that we just cannot wait to give you a great big hug! My Aunt Patty was so kind and generous as to make it possible for Griffin to go to camp this summer so be looking out for news about his adventures at camp later on. He is so excited but I can't really tell him too much because it is not quite set up, the director from the Autism Society has to do training for the staff at the YMCA and then we can decide which week Griffin can go.

Griffin is really looking forward to going to middle school, we are having an IEP meeting on the 5th about all the changes that are being made to accommodate him in the mainstream classroom. They are going to tell the classroom that he has autism so that the kids will know when Griffin has a behavior such as a meltdown and they will know how to or not to react/respond. I think that it is best that they know, education is the key at any age. I think that it was a mistake that they didn't tell the kids this year and that is why Griffin had the problem with the bullies.....they laughed at him when he had a meltdown.

My foot is still healing and I cannot do much on it, I still have to elevate it often but we still get to go out to the lake several times a week. The left foot still needs surgery and hurts like hell but it could be worse! I really can't complain, I have a good life.....I am blessed!
Posted by Lora at 3:56 PM No comments: Links to this post