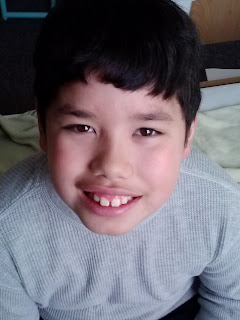 Since leaving Copestone Griffin and I have been getting along so much better, and I attribute that to the "Level System".  I have stuck to it and since that is what he learned in Copestone along with the methods for calming down it has proved to be a great combination. Now when he begins to get upset I ask him if he wishes to lose his rank in the level system and of course he does not because that would mean losing privileges and having consequences so he calms himself down immediately and moves on....and I am so proud of him. He shows much more control over himself now and much more maturity than ever before.

I do brag but he is not perfect as none of us are because he has slipped a few times and dropped from Level 2 down to Level 1 again but to him that is a big deal and he doesn't take it lightly anymore. He is beginning to learn what respect means even though it is an abstract term because it can have tangible outcomes. Also Griffin has learned that money has more value since getting out of Copestone and that food is more valuable and is not to be wasted, lessons that we have been working on with him with RHA for quite some time now not to mention lessons in life that I have been working on in life that I have tried for years.

He just seems so much happier and calmer....and I am working on it too. We just get along so much better! We snuggle and smile now instead of shout and worry about hitting. I just know that since he is on the new meds he has got to feel better at least if his behavior is any indicator he is. He seems to seek any opportunity to laugh and play now. We went swimming yesterday and he had a blast! I had a blast playing with him!

Tomorrow is his appointment with the psychiatrist Dr. Coopey 1st time. Then school starts back and I have an appointment with Jill for Big Brothers/Big Sisters. I can't wait!
Posted by Lora at 8:24 AM 1 comment: Links to this post

Griffin Is In The Hospital/Copestone

My heart has truly broken this time because my son had to be hospitalized because his hitting and temper was beyond out of control. The intensive-in-home team and I have tried everything for months now and he has not made any improvement, in fact, he has gotten worse...he even tried to hit me in front of the nurse in the ER while we were waiting to get into Copestone (the child psychiatric unit at the hospital).

I don't know if the fact that Griffin had been seeing people was significant to his hitting me and acting out but it would seem so to me and they took it very seriously too. The intensive-in-home team from RHA believes that it is significant and that he is probably hearing voices too because with visual hallucinations audio hallucinations usually happen as well. As an individual with Bipolar Disorder I have had times when I have had side effects from my medications that caused psychosis with audio hallucinations and let me tell you that it is very scary!!!! I feel so bad for Griffin, he doesn't have the words to describe what he sees and how it makes him feel exactly, other than "bad", he just says that they are real and that they walk around and that they ignore him.

I went to visit him the first day and I was so excited to see him and I thought that he would be excited to see me but the poor guy was perseverating on the fact that he was going to miss school and I was sad because I wanted him to miss me instead. So now I know better that when I go to visit to not have expectations of him and to let him be himself and accept whatever it is he has to say with unconditional love and to not take it personally. I think that with school he misses the consistency of it and his friends and that he still can't help but to take me for granted, that is just how kids are with their moms......because they know that we'll always be around with a fountain of unconditional love and acceptance, that no matter what happens we'll be around to catch them when they fall.....unless it is something that like this when he needs to learn a lesson and mom has to break her own heart for awhile in order to do the right thing for her son's future. One day Griffin you will thank me for this one short week that you spent in the hospital to learn a hard lesson that will make an impression on you for the rest of your life.

Not only are they working with Griffin in therapy but they have changed his medications: They stopped the Melatonin and started Seroquel. Stopped Abilify and started Risperdal. They are both used for anxiety and to stabilize mood swings.

I went to see my psychiatrist today and he doubled my anti-depressant for reasons that I do not wish to disclose but for one really obvious reason....I am really depressed! I have been for quite some time and I hope this helps because he said that it could make me worse since I am Bipolar. I go back to see him in a week, he said that I should notice a difference in a couple of days.
Posted by Lora at 12:23 PM 2 comments: Links to this post