Fishing for the First Time 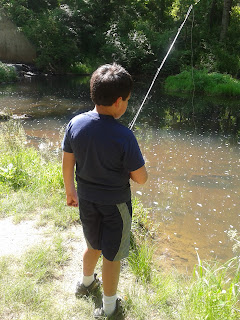 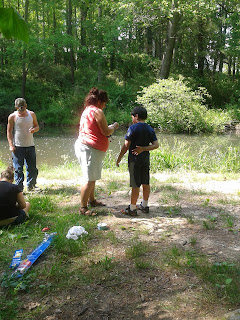 I took Griffin fishing with my friend Vicky at a small lake with a dam in the town where I grew up and Griffin really seemed to like going. He didn't get impatient or bored as I thought he might but instead he stayed there with his pole standing and trying to cast it occasionally but usually with help, and here you can see Vicky helping him bait his hook. She would kill me if she knew that I put her picture up on the blog but she doesn't visit so I don't have to worry about it. The fish weren't biting but I think that Griffin was interested enough that he wants to go back and do it again. I didn't buy him the right kind of reel, I just bought the cheapy kids kind and it apparently gets tangled up so I have to invest in one that is closed and doesn't get tangled but in the meantime we can use pole because it worked great for him Sunday.

Griffin has been doing marvelously on his homework lately, especially since Family Preservation left and since we haven't been using the schedules any longer. He doesn't feel the pressure anymore and feels more laid back with fewer meltdowns and no violence. Now that we have changed things at school there is less pressure too and Griffin doesn't come home saying that he is stupid and dumber than the rest of the kids like he used to.

I am considering having him placed in a self-contained classroom for his transition to middle school because I think that mentally and emotionally he is not ready for it. I e-mailed the autism specialist who knows Griffin and she just asked me to take a tour of the new school and then make my decision so that is what I will do. I will see what the new school has to offer and meet the new teachers and see what kind of room Griffin would have to grow there compared to the pressure of the mainstream classroom where I do not think the teacher is going to have mercy on him, where I think that because Griffin seems to be so "normal" that the teacher is going to expect him to perform and behave just as the other kids do because that is the problem that he is having with his teacher right now. Mr. Kirk has put so much pressure on Griffin that it has caused all the problems that he has had over the past year, that compounded by the bullying by his peers which the teachers did nothing about. Griffin was having meltdowns in school and they weren't telling me and the kids were laughing at him. Finally one of his teachers told me the truth about what had been happening and nothing was done to the kids for consequences or to help them understand that what they were doing was wrong and that they were hurting his feelings. All this time my poor child has been suffering and telling everyone about how he has been bullied and his teacher kept telling me and the team from Family Preservation told me that it was Griffin's perception that he wasn't being bullied, that the kids loved him and treated him like a brother.

If Griffin felt like a brother then why would he be coming home and telling me that he was bullied? Obviously his feelings was being hurt by someone. I approached the topic in the IEP and it was still avoided just the same because I didn't have an advocate there with me. I couldn't get anyone to come with me. There is nothing worse than going into one of those meetings alone! Talk about being railroaded and not remembering a thing that was said! All I remember are the papers that were put in front of me to be signed in the end to formalize everything because it all went so fast. I am sure that any of you who have been in an IEP have experienced that sinking feeling you get when in the end you try to recall what has been said as you sign your name and wonder if it is the right thing to do, especially if you don't have an advocate.

We are supposed to have a transition meeting before Griffin goes to middle school and then I am going to speak my mind and make sure that they know where Griffin is going to be placed because we are not going to have a repeat or even worse a tragic new situation on our hands in the Fall at the new school. I am certain that the teachers all talk about me and gossip because that is what they do best but what I do best is to take care of my son at any cost.
Posted by Lora at 1:15 PM 3 comments: Links to this post