This was an amazing book (one which I received free for review from Simon & Schuster) especially for those who are unfamiliar with autism. The Golden Hat offers a glimpse into the world of Keli who is a non-verbal autistic boy who uses a keyboard for communication. Kate Winslet took part in the writing of the book along with Margaret Ericsdottir, Keli's mother. The book consists of e-mail between Margaret and Kate about the Golden Hat Foundation which has been founded for non-verbal individuals who need care in a safe and loving environment for example once the parents have passed away. To raise awareness of autism the "golden hat" was passed around to very famous celebrities around the world through Kate Winslet and each time that the celebrity put the hat on they would include a quote of their own for the book. This was the part of the book that I was least impressed with because I think that some of the celebrities didn't take the request seriously and just said the first thing that came to their mind. Some were profound and thoughtful, I must give credit where credit is due.

Keli's poems are incredible and I dare say that some might have thought that such great work would not have come from a non-verbal child because so many people think of them as so low-functioning. I did enjoy the fact that there were photos of other individuals on the spectrum who were non-verbal with their first words...very touching.

In reading this book it hit home for me because for years Griffin didn't speak either and he had to use PECS (picture exchange communication system) and it was a struggle to understand him. He really didn't start talking until he was age 5. Just as Margaret states in her book, I am grateful for everything that I have and each moment that I have and having Griffin has taught me that. She feels that Keli has been her teacher and I feel the same about Griffin, it is amazing how that works.

Margaret confesses her guilt as his mother who wishes her son "normal" sometimes and I dare say that most of us are guilty of that as well and there is nothing wrong with it, it is something that we all think about. What follows is a tear jerker and will touch your heart because I am sure that you have experienced it yourself whether or not you have a typical child or an autistic one.

I highly recommend this book for everyone. Everyone can take something away from this book and feel awakened and inspired by it.
Posted by Lora at 12:19 PM 1 comment: Links to this post

I am learning to let go and stop being so darn clingy with Griffin...he is helping me in that department. It is not easy though and I find that I have to make myself stay away from him and stop being so affectionate all the time. He loves hugs but he is quick to tell me that he needs his space and for me to get away from him, it is not as though it hurts my feelings because I do understand that it is time to separate. It is more like I just don't know what to do with myself, isn't that what happens with moms when their kiddos take their space?

I know that he will need me for certain things but he is getting to be pretty darn independent, cooking in the microwave, cleaning up, and keeping himself quite busy most all the time. He communicates pretty well even though we do have our moments when it is an issue and there's an occasional meltdown. Nobody is perfect on either side of the problem but we have improved exponentially since I made my medication change. We are quick to say that we are sorry when we make mistakes and give big hugs and learn from our experiences ending up smiling even more sometimes.

We are still alone, without buddies or support but maybe soon we will find someone. Sometimes, there are people who you meet but they just don't seem to work out as buddies for one reason or another. So we are still looking. 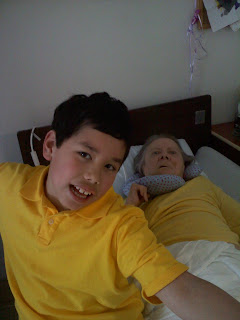 This is a photo of my Aunt Gail, who had a major stroke but who is doing well, and Griffin. We love to go visit her and always look forward to visiting her especially when we get to take her outside and give her favorite... Pepsi.

I am off the Geodon and have my human-self back, no more robot. I am playful and have emotions again. I am animated and alive! We laugh and it feels good and Griffin follows rules more now than he used to. We do much better in public. Hope that you are reading this Carrie, Liz, and James. I know that you have been reading this blog all along. We follow our own plan now and it is not up-to-the-minute like yours, we do fine with a more relaxed schedule. There is not the pressure to get things done so quickly and that way we can have more fun. I had a lot of anxiety when the family preservation team was here because I felt like I had to live up to what they set up for me and now I know that I don't! I can be the parent that I know is right and good for Griffin, the one that he loves and respects, now that I have a different attitude and I am not so stressed out.

We had the IEP and some changes were made but I didn't have the advocate there that I wanted and I guess that things went as I wanted. He is going to be pulled out of his mainstream classroom for 45 mins. for reading in a small group since his teacher gave him an F which means to me that he was not doing his job of helping Griffin understand the material or communicating to me that Griffin needed the help. All he told me was that Griffin needed to do his homework not that he was having trouble in class. He is going to have less math homework and easier because his teacher was giving him trigonometry and calculus that he was giving his peers and expecting him to complete it in a short period of time at home and all it did was cause sheer frustration and meltdowns.....every night! Most of it I couldn't figure out nor could the Intensive Home Team, they were having to practically do every single step for him.

We are going to have an OT evaluation for him because I had asked his private OT Sarah to fax over a letter to them about Griffin and some additional information and it was an alert to them that something needed to be done about his handwriting and his sensory needs in the classroom. This will be done before he goes to his new school in the fall.

In the transition meeting in May we will address the issue of bullying again if Griffin still has a problem with it. We will address the issue of communication with the teachers and staff in the new school and what is expected of Griffin because he will be in 5th grade and his peers may not be so kind and forgiving and so accepting as his elementary peers have been.
Posted by Lora at 1:12 PM 3 comments: Links to this post