Griffin Is Making Great Progress Each And Every Day 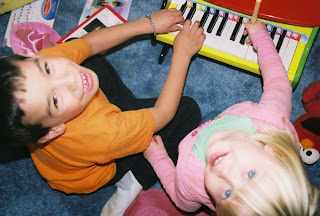 As you can see Griffin is having a great time sharing with his cousin, he has come such a long way since last year when he came into contact with her, he would not share or have positive interactions with her. Now he is not only playing with her but he is exchanging conversation tidbits with her. She is 3 years old so her language is somewhat limited but they seemed to do well together in spite of having short exchanges in communication. Every little bit is such great progress in my mind, it thrills me to see him show interest in carrying on with another child.

My sister and her family came to visit from North Carolina most of the day and it was a really good visit, it is always nice to see them. Last weekend my mom, Griffin, and I went to see my nephew wrestle, he is in high school, and I was amazed with how well Griffin handled being in the loud gymnasium. Griffin just sat there with his headphones on while he watched a DVD occasionally climbing on the bleachers. Later we went to eat and he sat there so nicely and ate pizza (his absolute favorite) so I think that he had a pretty good day all in all. I just love watching my little boy mature and become more aware of the people around him and engaging in conversation so much better than he was a year ago.

There's not much else to report except that Griffin is having a great winter break so far, we are going to the playground regularly and to feed the ducks and geese which he loves. I hope to post again before the new year but just in case I don't get around to it then I would like to wish everyone a perfectly wonderful and Happy New Year, may you all be safe and feel loved as we transition into 2008. Lots of love and hugs to all of you!
Posted by Lora at 5:14 PM 4 comments: Links to this post

This Time Last Year In Anchorage 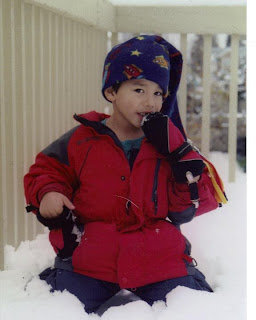 My oh my how things have changed in just one year, here is a picture of Griffin at our apartment in Anchorage about a year ago..........look at all the beautiful snow. Griffin was never a huge fan of snow partly because he wouldn't leave his mittens on his hands so they of course got quite cold and I suppose that it would have been more fun if we could have made a snowman but the snow was always too powdery/dry for that. Powdery snow is good for driving, shoveling, and it is more beautiful than slushy snow but it just doesn't work for creating masterpieces, not unless some water was added by some means. The snow sculptures that we had downtown worked out wonderfully but I swear that they must have used some kind of means to keep them together. This time last year (winter of 2006) we were in Anchorage until December 2nd and then moved to S.C. and Griffin took quite awhile to make the transition but has come a long way since then. There are a couple of things that Griffin misses in Anchorage, first he misses his kitty "Pisgah" and asks for him almost every single day and he doesn't understand why we cannot have a kitty (because my dad said that it would shed everywhere, like he would have to be the one to clean it all up..............right dad!). It makes me sad that he cannot have a cat here and I often entertain the idea of going to the shelter to pet the kitties but I am concerned that it might bring on a meltdown if he is teased into thinking that he might get to take one home. What do you guys think? The other one that he seems to miss is Kathleen, he loves to look at the photo album and the pictures of them together in the classroom.

Gone are the days of thinking about snow and worrying about sub-zero temps and looming darkness throughout the winter. It is so nice to be able to have more freedom of movement and regular day/night hours in a 24 hour period.

Griffin has been eating really well the past few weeks, granted it is still the same foods over and over, but nonetheless he is still eating more food more frequently. He isn't getting fat by any means but I suppose that he is going through a growth spurt and getting taller.

It is time to get up from here and do something else, I will do my best to write more often and keep you updated on what's going on here. I hope that you all are enjoying this winter break and I hope that the kids are not bouncing off the walls, so far Griffin is doing fine but it has only been a couple of days so far. I wish for you all to be surrounded by those you love and feel pure joy in your everyday life. If you want to check out what we were doing this time last year here is the link. 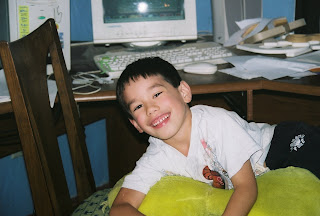 This is my new favorite most recent photo of Griffin, it really captures his personality which is practically perpetual smiling and laughing. There's not much to add right now, we are doing very well and life is good/running smoothly.

Griffin is reading at second grade level without hesitation and that is such wonderful news. I spoke with his speech path. and she told me that she is helping to improve his social skills and conversation with his peers, he is showing great progress in this area. I will know more about what he's been doing in school when we meet next Thursday to set some new goals for him. I observed Griffin in his session with his private speech path. and he did a great job reading a book and answering questions about what he had just read. He also read the "I Spy" book and really seemed to enjoy finding the objects in the pictures.

I hope for you my friends that you are having a stress free holiday season, this is the key to enjoying life in general as I see it. It is time to go pick up my gorgeous little guy from school, have a wonderful weekend.............Hugs to you all!
Posted by Lora at 1:24 PM 4 comments: Links to this post