This is Griffin with one of his Intensive in Home workers. 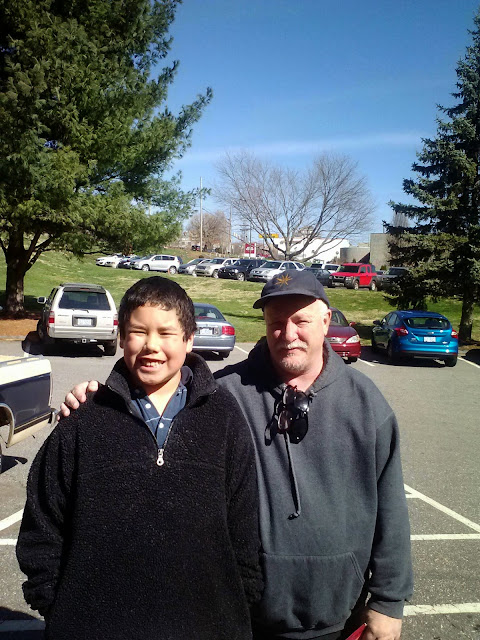 Griffin Is So Affectionate

When we go to feed the ducks and geese, Griffin just can't resist picking up a duck because he wants to snuggle with everything he loves so much. 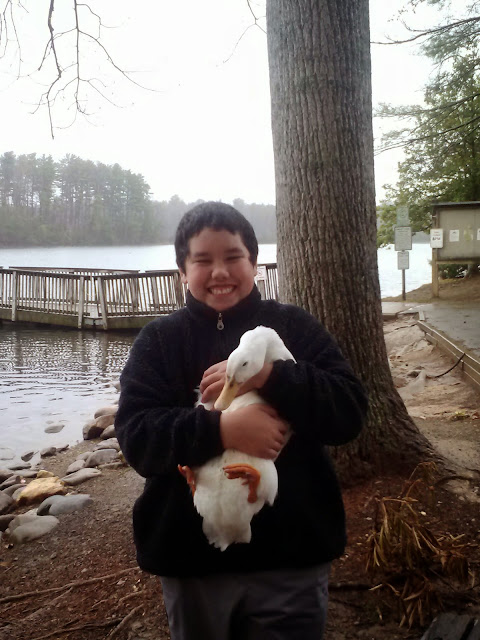 It Is My Goal As Griffin's Only Parent In His Life To Teach HIm To Love HImself For Exactly Who He Is. 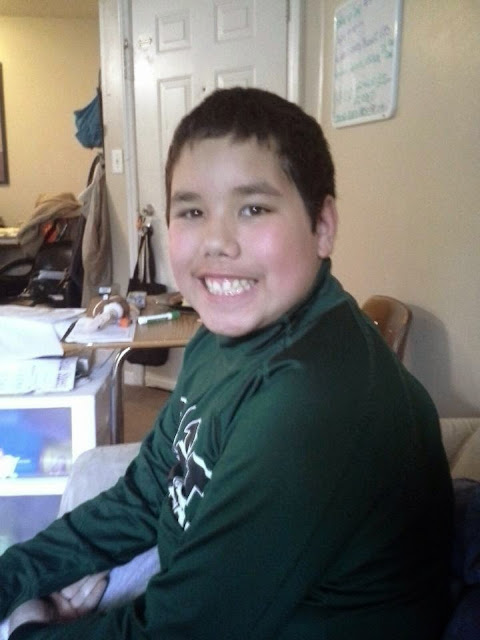 Griffin enjoys spending time outside our home, going out and seeing people, mostly adults because he simply doesn't understand his peers and his peers don't seem to understand him even though they are friendly and will greet him that is as far as it goes. The teachers at school say that the kids are nice to him but he reports to me that all he does at recess and P.E. is stand around by himself. This greatly concerns me because he not only asked me why it is important to have friends (at school) but I just I am also concerned that he is just relying on me as his sole relationship where he gets all his attention and friendship from. However, he does see his Intensive In Home team three times a week and his respite provider once a week he just does't have any interest in interacting with his peers. When the neighborhood kids are outside playing and making noise he gets very upset by this and yells out the window or runs out the front door to tell them to be quiet in a very angry and frustrated tone.

Maybe I shouldn't care so much, after all I do have friends who homeschool their children and tell me that they do not have social groups for their autistic kids. I do not know that it is a great idea to not help them learn how to socialize with individuals their own age because I do want him to have a fun childhood where he experience the joys of being carefree and playing while developing friendships with kids who could be there for him as support throughout his school years. I also think that it fosters strong self-esteem and self worth especially now that he is in puberty and he doesn't seem to understand the dynamics of the importance of knowing someone who has things in common with oneself so that he can learn more about how the world works not only as an autistic individual but learn how neurotypical kids differ yet could be a buddy to him as well. The neighborhood kids have tried playing with him but Griffin can't participate with them in the way that they want him to. He is not at the same level emotionally, physically, or developmentally so there is a gap there and I don't know how to bridge that gap and help them to find a way to get along. So they end up ignoring him and walking away when he comes near or if they stay they don't try to talk to him but I can't blame them completely because Griffin doesn't know how to communicate with them either.

After all it is a hallmark of autism that the individual only likes to talk about himself and the things that he is interested in and has difficulty talking or showing interest in what the other person wants to talk about or do. This is a big problem when trying to socialize because in order to get an autistic individual to come into your world and out of his is to make an effort in showing interest in him and what gets him excited such as with Griffin he is interested in commercials and advertising icons especially the vintage ones. He has all of the icons and mascots memorized and loves to look them up on YouTube and to draw them for hours. He collects the plush toys too (has way too many as a matter of fact but he takes great care of them). And because Griffin is so emotionally/mentally young for age 12 his peers are not interested in playing with the same kinds of things that he does. He does a lot of imaginary play with his toys. His therapist said that it is harmless and that it shouldn't be discouraged, that he will grow and develop at his own rate and time.

I want Griffin to be happy but to have a rich experience as a child before he becomes a teenager and doesn't want to do things that a child does and becomes interested in things that are perhaps more dark and violent such as video games or something along those lines that teenagers get into. He may not though because he is a furry and furries are forever. They grow up into adult furries who dress up in costumes and have an exclusive group who go to conventions and have online chat rooms where they can communicate with each other so that they can be understood and feel accepted. Possibly even finding someone who loves them for who they are and does not judge them as being weird or inappropriate, Griffin does know how to love unconditionally and accept others for who they are without judgment, he is such a sweet boy that I worry about him. He will find love but I just hope that no one takes advantage of his kindness and naivete.

I know what it is like because people have taken advantage of me my whole life and treated me like I am stupid. I used to be referred to as a dumb blonde, now it is as if I am invisible now that I am not the attractive blonde anymore but just a plain Jane who refuses to conform to society's  pressures to look and act a certain way in order to fit in. I refuse to put that kind of pressure on myself as I used to and to have that level of anxiety and to be a practicing alcoholic who self-medicates in order to try to fit in. I don't ever want Griffin to feel that pressure, I want him to feel that he is perfect exactly the way that he is and to be proud of being autistic. If he wants to wear pink and play with toys then others will just have to deal with it. I am teaching him to be himself and to nurture the person he is as being different and that if others do not accept him then that is their problem not his. They have a narrow mind and don't know how to love others for who they are which means that they do not love themselves because they project hate and disapproval due to society's norms.

I hope that all parents teach their children to love themselves for who they genuinely are and to not try to fit in socially just because that is what the media and the religions, and the schools and government teach us.....to conform. If it means that he doesn't play with others who do not accept him then so be it! He prefers to play alone anyhow and I know that one day someone, even if it is only one person, someone will accept him and love him as the person who he is and will show interest in his interests and talk to him for hours.