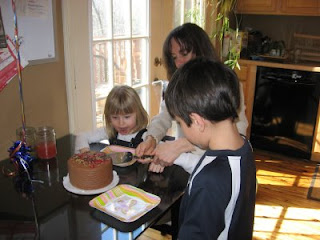 We had a great time in NC visiting my sister and then staying with some very close friends of mine, talking, crying, and laughing all night long. Griffin loves to stay there because he has all the things that are precious to him: his DVR, all of his characters, all of his DVDs and DVD player and lots of doggies to play with and watch. We took Abby with us and she had a blast because she had a huge backyard to play in and run around like a puppy.
Well, I have good news about my health...I don't have to have surgery on my ankle but the ortho doctor told me that because I have Fibromyalgia it could take up to a year for it to heal, that part's no so great 'cause it still hurts like heck.  Been having some manic episodes lately which totally sucks! Actually it's more like rapid cycling which is even worse but I see my doc on Wednesday and I trust that he will fix me right up with all the right meds. He is by far the best doctor that I have ever had--bar none.
I've been brushing up on reading hands/palmistry again, I used to do it many many years ago all the time but have forgotten a lot of it. It is so fascinating and I love it. Doing great in school, just finished my final essay 2 weeks early because I was so excited to do it, I just love to write. Hope I did as well as I think that I did.
Griffin has a pretty bad ear infection and vomited last night, don't know why unless he caught some stomach flu as well....poor little guy. I feel so bad for him but to see him you wouldn't be able to tell that he is sick because he just continues on with life and doesn't let it get him down. Did I mention that he is in the accelerated reading program? Yep, and he is doing excellent!
Posted by Lora at 2:10 PM 4 comments: Links to this post