Autistic Child Is Abused At Elementary School In South Carolina

Please take a look at the other blog that I have and its content about how my son was abused at his elementary school here in South Carolina. I am so livid that there's nothing I can do legally since I cannot afford a lawyer to represent me at a due process hearing against the school district.

I have decided to go public with our story, I am going to send the information to the TV stations and newspapers and see who might be interested. If I have to I will go to the Oprah and Dr. Phil web sites and e-mail them this link to see if they have already done a show on disabled children who are abused in school and there's nothing that can be done about it. The parents cannot represent themselves going up against a group of sharks who call themselves attorneys and who eat parents, especially single parents, for lunch!

Take a moment, there are only two entries but they are both quite telling. Thanks you guys for all of your support and I hope to see some comments left here and there for me. Your opinion counts with me!
Posted by Lora at 9:38 PM 1 comment: 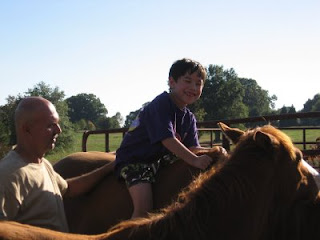 As you can tell, Griffin absolutely adores horses. He was so thrilled when we went to visit our neighbors who have horses and they offered to let him sit on the mare of the foal who you can also see in this photo. The neighbors, our new friends, were so kind and so helpful because they gave us information about activities and organizations that have special needs horseback riding and events. There is a place that is about 40 minutes from here that has special needs riding "classes" and I just know that Griffin would love to go, if the price of fuel keeps going down then we might be able to do it, and I would love to see him so happy as he is when he is around them.

On Wednesday, Griffin went to swimming and for part of the session he worked really hard but then he became tired and frustrated and began, for the first time ever, to shout when the OT was talking to him and giving directions. She had asked me if I had changed his meds but I had not and let her know that it was probably because he had finally become so comfortable with her that he was just being himself. Later, when it was time to go to soccer, he told me that he did not want to go so we stopped by to see the horses instead. I am so glad that we made that choice.

I am still not sleeping, tried Ambien and it is NOT working at all for me, and I go to see my psychiatrist next week. I sure do hope that he has some kind of miracle drug that will work, continue to work, and help me sleep through the night. As it is now, I finally get to sleep around 4:00 or 5:00 and it is really hard to get up when Griffin tries to wake me around 7:00 or 8:00 a.m. The times that I have gotten "restoritive sleep" it was so incredible and made such a difference in my quality of life. I had very little pain and the Fibromyalgia was, seemingly, put at bay. Without sleep or with very little, one feels very old and it is so hard to move around, the mind is not clear, and the moods are not so great either.

As far as Home Schooling is going, Griffin is still doing great with his photographic memory, he soaks up everything that we go through. I bought him a really cool ant farm that has this substance in it that is a gorgeous blue which is their food and water so there is no maintainence. not only is is totally clear and unbreakable but it illuminates at night and glows a neon green. So far he is not thrilled with it but I think it is because we do not have any ants in it yet. I believe that once I gather up some that he will become more intruged by it, at least I hope so or I will send it back. The Discovery Store online has some pretty incredible stuff but much of it is too old for him even though his typical/NT peers are probably doing it.

Think that I am going to go lie down and read, Griffin told me tonight that he didn't like books......which bothered me a lot and though I try, I cannot seem to spark an interest in them. I wonder if what I am teaching him, with the (expensive) books that I have, is helping him at all.
Posted by Lora at 2:11 AM 1 comment:

Playing In A Soccer Game 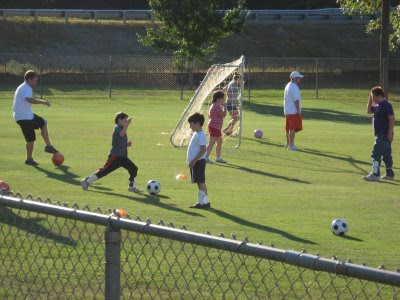 Here's Griffin playing soccer, he kept his eye on the ball the whole game, running at times but always watching the ball. I think that he actually got to kick it a few times but the most important part is that he made it through the entire game from 5:30 - 7:00. I couldn't stop smiling even when my face started hurting. I am so proud of him, he has come such a long way in such a short period of time although he did not pay any attention to his fellow players, just for him to enjoy playing was a big deal.

One of Griffin's OTs told me today that he did very well at therapy, on Monday, with his group (of boys) during his session. They went outside and played on an obstacle course and each one had to come up with ideas on how to change things around when they were first in line. She said that Griffin did an excellent job interacting with the other boys which is so exciting to me, I think that the group has been very good for him because there is so many boys and both Speech and his OT are present.

Home schooling is going great still, we studied a lot of science this week and combined it with art which turned out really well. Art is a wonderful medium for him to work on his fine motor skills, his cognitive skills (science through art), and his emotional expression. He is a kinesthetic/visual learner so every time that we can combine our studies with art we go for it! One day I will put a picture of one of his pieces on here so that you can see how amazing an artist he is. It seems that each time he creates a piece, everything that we studied he commits to memory and it is set in stone and the information is there to stay. He can recall ever bit of information when asked after only going over it one time.

It is helping me to overcome the bitterness and anger that I felt about how he was abused at the school because I know that there is no way that he would have progressed in such an environment and now he is so much happier. At least this is how I cope with the guilt that I feel for sending him into a place that was causing him so much confusion and mental and emotional pain.

Apparently, I do not have his meds tweaked properly because he is still a bit too sleepy during the first part of the day and into the afternoon, he wakes up in the evening and makes up for lost time. Today he did go swimming and he always loves it and is showing great improvement there as well. He may act sleepy before we get there but once he is in the pool he is just fine and after he is finished his energy level is up also. Griffin dislikes going out of the house and going to appointments and/or running errands so he tends to be or act sleepy/tired then the most. If only there was a way, that I knew of, for me to help increase his energy level through proprioceptive or vestibular input while we are out. Guess that I need to ask the OT about it because while he is at home he does it himself by jumping on the mini tramp and swinging but he has no means to do it by himself while we are away.

I have been having bouts of horrid anxiety and mania for several weeks now and they are so severe that I cannot not otherwise function. I usually have them about every two days, a product of rapid cycling Bipolar Disorder. Finally today I went to see my doctor and got some meds specifically for anxiety and boy am I grateful! Severe anxiety is like being jailed inside one's own body and struggling to get out because it feels like someone has a remote control and is hitting fast forward constantly. It feels so uncomfortable to be in one's own skin especially if there is fatigue (from lack of sleep) and feeling as if on speed all at the same time. My body hurts like hell the next day and I sleep for about 12-14 hours because of the Fibromyalgia and sheer exhaustion from the whole situation. I am so grateful that my mom is around to help me out by watching/entertaining when necessary, and feeding Griffin.

That's about it, I bragged about my special and wonderfully brilliant little guy and complained about my health..............all in a day's work! Hope you all are doing well and enjoying life!
Posted by Lora at 10:43 PM 1 comment: