Michelle L. in Alaska please get in touch with me because I have missed you and I can't send you a message on Facebook.
Posted by Lora at 9:57 AM No comments: Links to this post

As I sit here Griffin is playing with his "characters" and looking for more food. That is his favorite pastime lately probably because he is going through a growth spurt. He is  57" high and weighs 96.2 lbs. When he is in line with his peers he is considerably taller and appears to be less frail or slender than they are. I know that he is going to be a big guy because his dad being Samoan and a very hearty, tall, and big boned. Samoans are not to be bothered as even the women are large but they are so kind and gentle but unfortunately Griffin's father decided that he was not going to acknowledge his child and be a part of his life. Fortunately, Griffin has not asked about having a dad and when he asks I will just have to tell him the facts...that I do not know where he is.

We had a pleasant holiday because my parents came over for the better part of the day and so did my sister and here family. I cooked a turkey for the first time and the dark meat didn't get done all the way through and it was grizzly but the breast meat came out fine and was plenty to have leftovers. Mom and Griffin made gingerbread cookies that came out great and was a big treat for us because there is no sugar allowed in home since we are both prone to gain weight. When Griffin earns points for good behavior then he gets to buy whatever he wants and sometimes it is chips or something sweet.

I went to the foot and ankle doctor and he prescribed braces for both feet and ankles which I wear all the time except for sleeping and showering. No physical therapy because it just makes the pain worse and he told me that I should not expect to begin to feel better until at least the Springtime. He also prescribed Celebrex which helps the inflammation but not the pain. I do not take pain meds because even though I can take two of them and one is not enough I do not want to go down that slippery slope, it is too easy to become reliant on them thus leading to possible addiction and/or needing more and more to get the same effect. I stopped drinking and smoking over a year ago (which does not make me think that I am an angel) and have a history of self-medicating with alcohol when I was manic.

I hope that all of my blogging friends had a wonderful holiday and I say "holiday" because I don't want to offend anyone who is of other religions or beliefs other than Christians such as myself who does not  celebrate religious holidays because I am Agnostic (not an atheist, mind you) I do respect those who are of religious beliefs.
Posted by Lora at 5:10 PM No comments: Links to this post 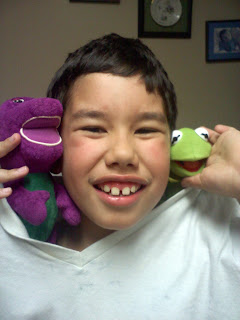 Griffin is growing and changing in so many ways it is so wonderful. He has learned to be more respectful of me and to be a better listener. The talk that he had from Papa made a big difference on Thanksgiving too. We are both more loving and affectionate with each other sharing lots more hugs.

My feet and ankles are worse than ever and it hurts just to sit in this chair, if my feet are not propped up then I have increased swelling and sharp stabbing pain coming from my bones. My PT said that it appears to be arthritis to him. I will know more after I see the foot and ankle specialist on Wednesday.

I hate that I have not been keeping this blog updated I must try to sit here earlier in the day when I have less pain.
Posted by Lora at 4:59 PM 2 comments: Links to this post