On A Hot Afternoon 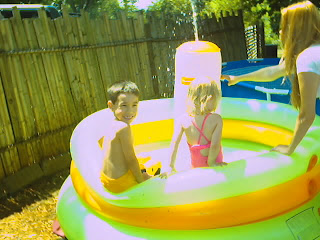 Griffin had a great time with his cousin playing in the pool, it was really hot in N.C. when we went to visit and I think that he had a blast. Not much else to report, I haven't felt much like writing in the blog and haven't had the time to read blogs..........so I apologize that I am behind on both. Hope that all of you are doing well, the summer is going great for us, it is just reeeaaally hot here and humid but that's okay, we are adjusting to it. I will try to post again soon and let you all know more about what is going on with us. Love and hugs to all of you, my friends.
Posted by Lora at 11:49 PM 4 comments: Links to this post 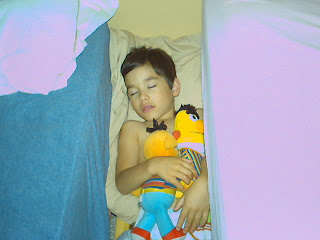 It's been awhile since my last entry, certainly not because there hasn't been anything going on but mostly because I just haven't felt inclined to do so. Even though I am not depressed anymore I still have some issues with motivation and with getting things done that I need to or usually want to do, I am working on it though. I am pleased to report that I am a very happy camper, much like my sweet lil guy, and that things are looking up in my life and I look forward to each day and appreciate living in the moment once again.

Griffin has been doing wonderfully, he has been having quite the busy summer so far with speech/social group, OT, swim therapy, and his weekly session with Ms. A here at the house. Each therapist has reported that Griffin is paying really good attention and being a good listener, he responds well to their requests and seems to be enjoying the activities that he is participating in. Ms. K the OT who instructs him in swimming has had glowing reports of Griffin's progress and an added bonus is that she works him so hard doing exercises in the water that he is so tired and mellow when he is done. I say that it is a bonus because, as I mentioned before, he used to be overstimulated after his swimming in Anchorage and would be wired for sound but Ms. K knows how to get him to really work hard and it wipes him out.

In the social group which he attends each Monday, Griffin has been working really well with his peers and cooperating with his Speech Path. Ms. T. There are 4 boys in all and she puts 2 together to work as a team and so far Griffin has made excellent progress in this area. His OT and I are working on helping Griffin to hold his writing and eating utensils properly but otherwise he is doing really well in OT especially with cutting and coloring within the lines.

It's Father's Day and Griffin's father is still nowhere to be found but that's okay because we have done well without him thus far, for almost 6 years, so we can make it just fine without his help although it would be nice if he was in Griffin's life and it would be nice if he even met Griffin and knew what an awesome little guy he is. It seems that Griffin is not even aware of not having a father around and I guess that is a blessing in disguise because I wouldn't ever wish on him to feel left out or neglected because his father is not around. Even though Griffin's father has been so irresponsible and has never been in Griffin's life I would never speak ill of him because he is Griffin's dad and it doesn't make him a bad person for being irresponsible. You may not agree with me but this is simply the best way that I have to cope with raising my child on my own and it works much better than bitterness and resentment! When I was with Griffin's dad he was a sweet, kind, and generous man and this is how I choose to remember him and I have no regrets whatsoever.
Posted by Lora at 7:49 AM 5 comments: Links to this post

Our trip to N.C. was great, I bought a new bike for myself, Griffin played with his little cousin, and we got to visit with my sister and her family and my brother and his family. It is always so nice to visit N.C. it is so beautiful there and it is nice to see my family. Griffin seemed much more comfortable playing with his little cousin "E" this time whereas last time he didn't seem to really want to interact with her. They played on the teeter toter and in E's tent/tunnel laughing together the entire time. I didn't get any pics this time unfortunately because I forgot to take my camera in from the truck.

Griffin had a play date with his little friend "C" and once again he seemed much more comfortable playing and interacting with him more so than the previous visit. C kept wanting to wrestle with Griffin, it was so cute and I think that Griffin enjoyed having the deep pressure of C lying on top of him because he was laughing so hard. This time Griffin wasn't so fixated on petting the cats and just spent a short amount of time with them.

I had an individual comment on my last post about so-called miracle cures and I want to make it clear that I do not believe in such things. I wish for everyone to know that I trust that Griffin will take the path that he is meant to take and that if that means that he recovers from autism then great but if he does not then I am fully prepared for that as well. I am not a proponent of miracle cures for autism and do not promote the use of them because I think that it is a recipe for disaster and disappointment. Griffin is awesome exactly as he is and if he doesn't change then I will be fine with that and I accept him and his autism with open arms. He is the joy of my life and he is perfectly wonderful just being Griffin..........the happy little camper that he is!

My friend in Wisconsin has just tried a drug(on her son Noah) that is experimental for the use in autism, it is called Namenda and has been used typically for dementia in Alzhiemer patients (I know that I didn't spell that right). Anyhow, she has had great results with her son Noah who is 10 years old and autistic. I was just wondering if anyone else has tried it or heard of it. I am not planning on using it for Griffin because he will not take pills and besides it has to be used with a mood stabilizer and he does not need one of those. Apparently Noah has shown signs of being more verbal, being much more social, and outgoing since starting the medication.

I also would like to know if anyone has had any experience with the drug Mirtazapine which is used for sleep in children with sleep disorders. Griffin is not so unusual in that he has a huge problem with insomnia and I have been giving him Clonidine which is typically used in adults for high blood pressure but they found that it causes sleepiness as a side effect so it is also used for that in children. I don't feel comfortable giving him hypertension meds even though the doctor said that it will not lower his blood pressure but I am not sure if I want to try him on the Mirtazapine which is specifically used just for sleep, I hate giving him anything at all but I have to have my sleep in order to function and to keep my moods stable besides I take Seroquel for sleep because I also have a huge problem with insomnia as well and cannot stay up with him at night. I am just curious if anyone has used this medication and if there have been any ill side effects from it.

Hope that you all are doing well and having a great day! Many hugs to all of you, thanks for reading our blog!
Posted by Lora at 9:03 AM 6 comments: Links to this post

Going to N.C. and Some Really Good News!

We are doing great! Griffin had his first swim session with Ms. K and boy did she make him work hard! He loved it so much and is really at home in the water and has no fear which can be good but scary at the same time. Ms. K said that her main focus is on having him learn safety, to learn to go to the edge at all times just in case there is a situation in which he gets in trouble. Griffin seems to be learning to swim quite well, nowhere near doing it by himself but he's getting the hang of it anyhow. For the first time ever he was tired after swimming instead of being wired and over-stimulated like he used to be in Anchorage. Ms. K really got him to exercise and worked him hard for a good 45 minutes but he was smiling the entire time. I don't have pictures yet but as soon as I get them put on disc I will post them.

We are going to North Carolina today to see my sister and her daughter who just loves Griffin, she loves trying to play with him as he is still not really that interested in playing with her yet. We do good if he is takes turns and shares with her, we've been working hard on that, he's been having some difficulty with that.

I got some good news a couple of weeks ago, I was approved for my Social Security disability!!!! I am so grateful for that, it will be so nice to have some extra money to get the things that we need. I will now be able to get a car so we will have the freedom to move around and go out and about on our own. I have been relying on my Mom to take us everywhere and now that is finally going to change!!!!!!!! Hooray!!!!!!!!!

Change is such a good thing and I always welcome it and am now able to adjust to it much more easily especially since I now have a positive outlook on life and know that I will get all that I want and need.

It's getting quite hot and humid here and it makes me miss the summer weather in Anchorage because it is so perfectly wonderful and comfortable there, so green and pristine there, I just love it! Guess that's all for now, be back again soon to let ya know how our trip to N.C. goes.
Posted by Lora at 10:02 AM 3 comments: Links to this post