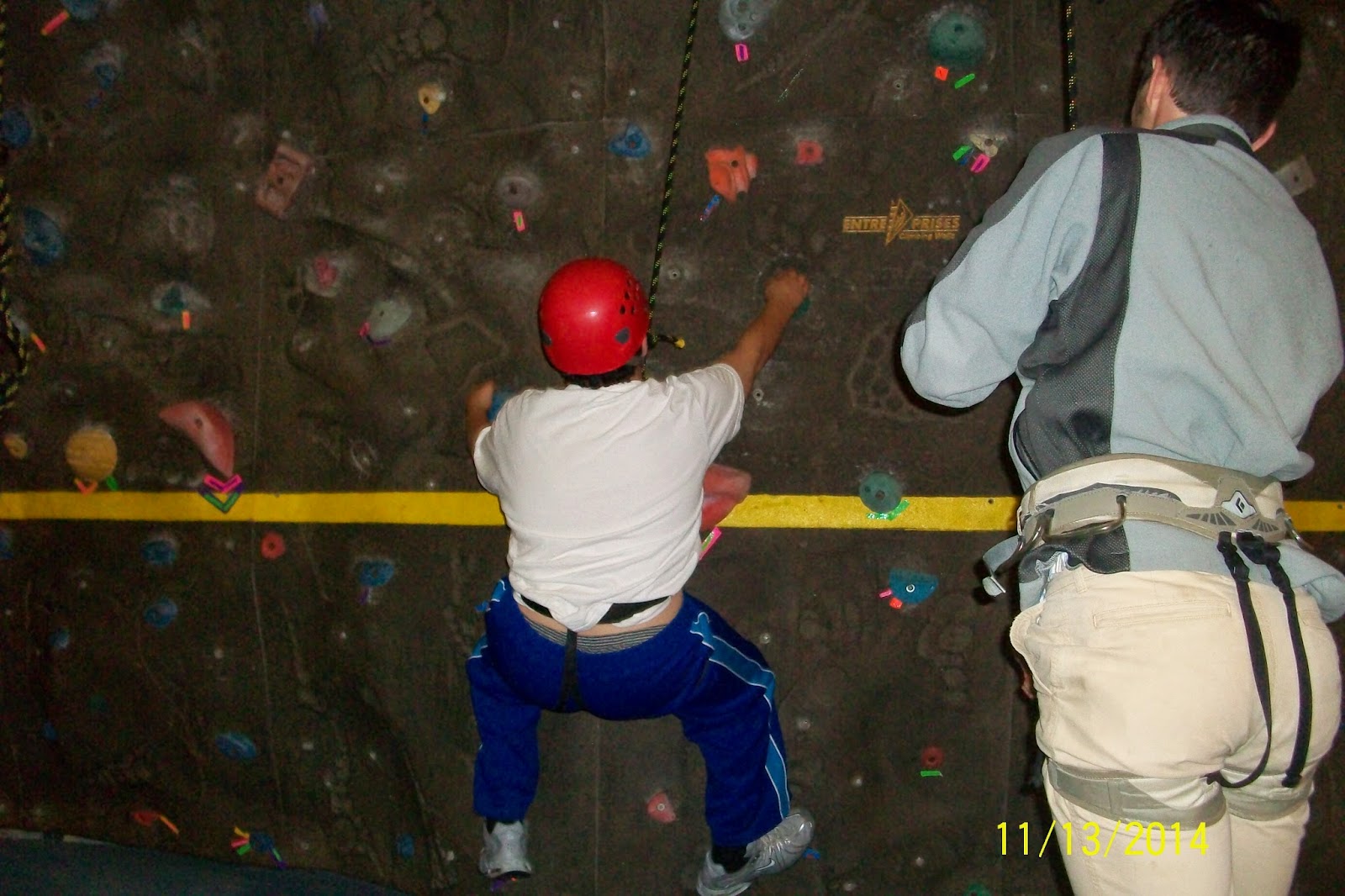 I was so proud of Griffin as he tried and tried for so long and finally here you can see that he had success in grasping the wall and holding himself up. I made the mistake of clapping for a couple of seconds and he went ballistic. He hates it when I praise him like that but in the moment I was so excited for him that I forgot, it was just automatic. I got him calmed down and he kept on trying but he wanted Nick to help him. Nick explained that he was only there to help him by telling him how to do it on his own that climbing is something that you have to do by yourself. Griffin is still working on his gross motor skills, on strengthening his core in OT and PT but has made a lot of progress.

I have been taking him swimming almost every day and it for three purposes, one because he loves it so much, two because it is excellent exercise, and last but not least...it is the only thing that I have found to motivate him to get him to do the work for homeschool and unschool during the day. Now everything is so much easier.

My health is much better as I am doing yoga every morning eating healthier and little by little my health benefits are showing up. Right after I exercise my blood sugar and blood pressure go down. Eventually the benefits will be greater and I will be able to do more each day.

Autumn Came to an Abrupt Close, Homeschooling is Going Great, and My Health is Questionable 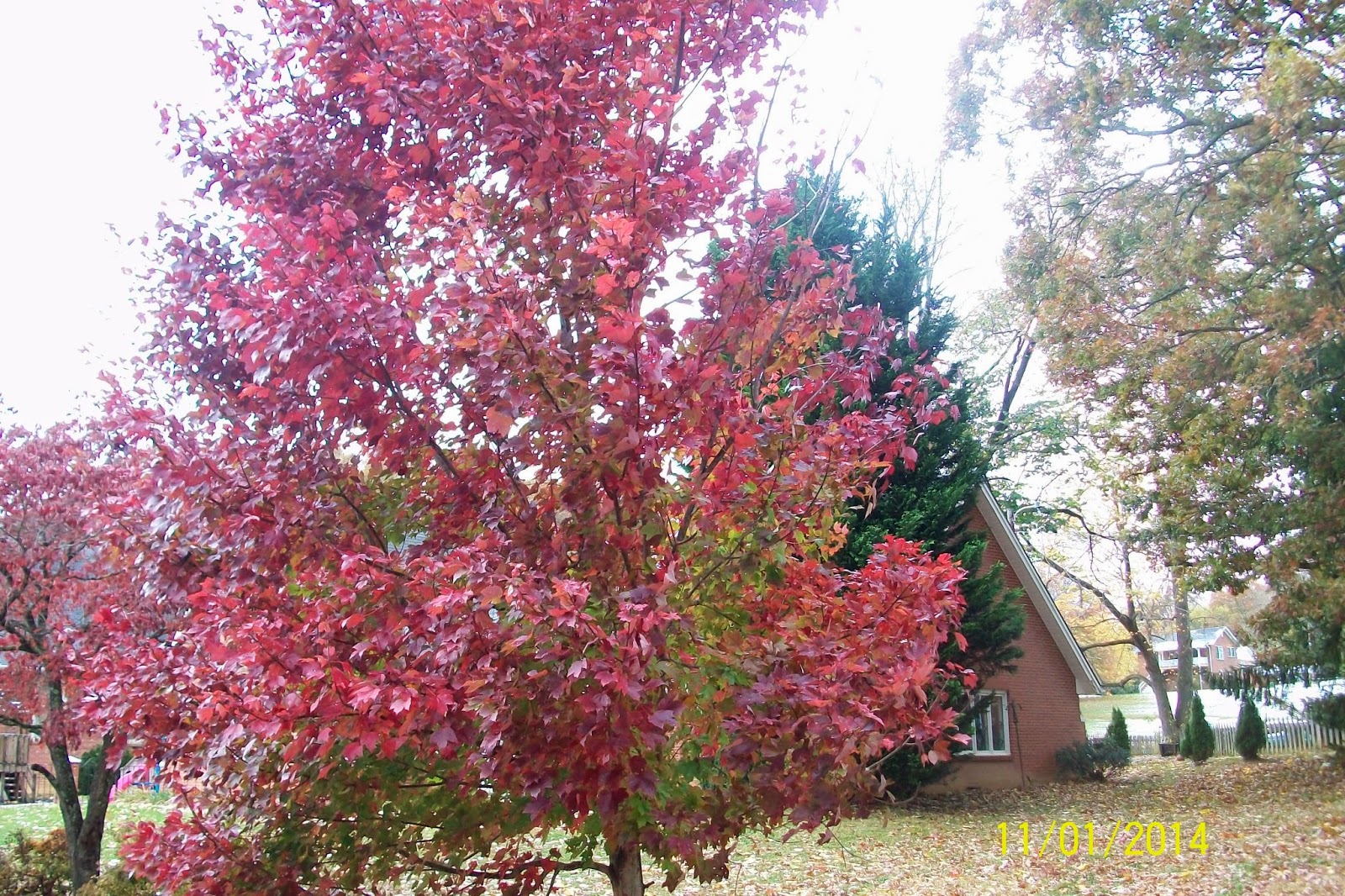 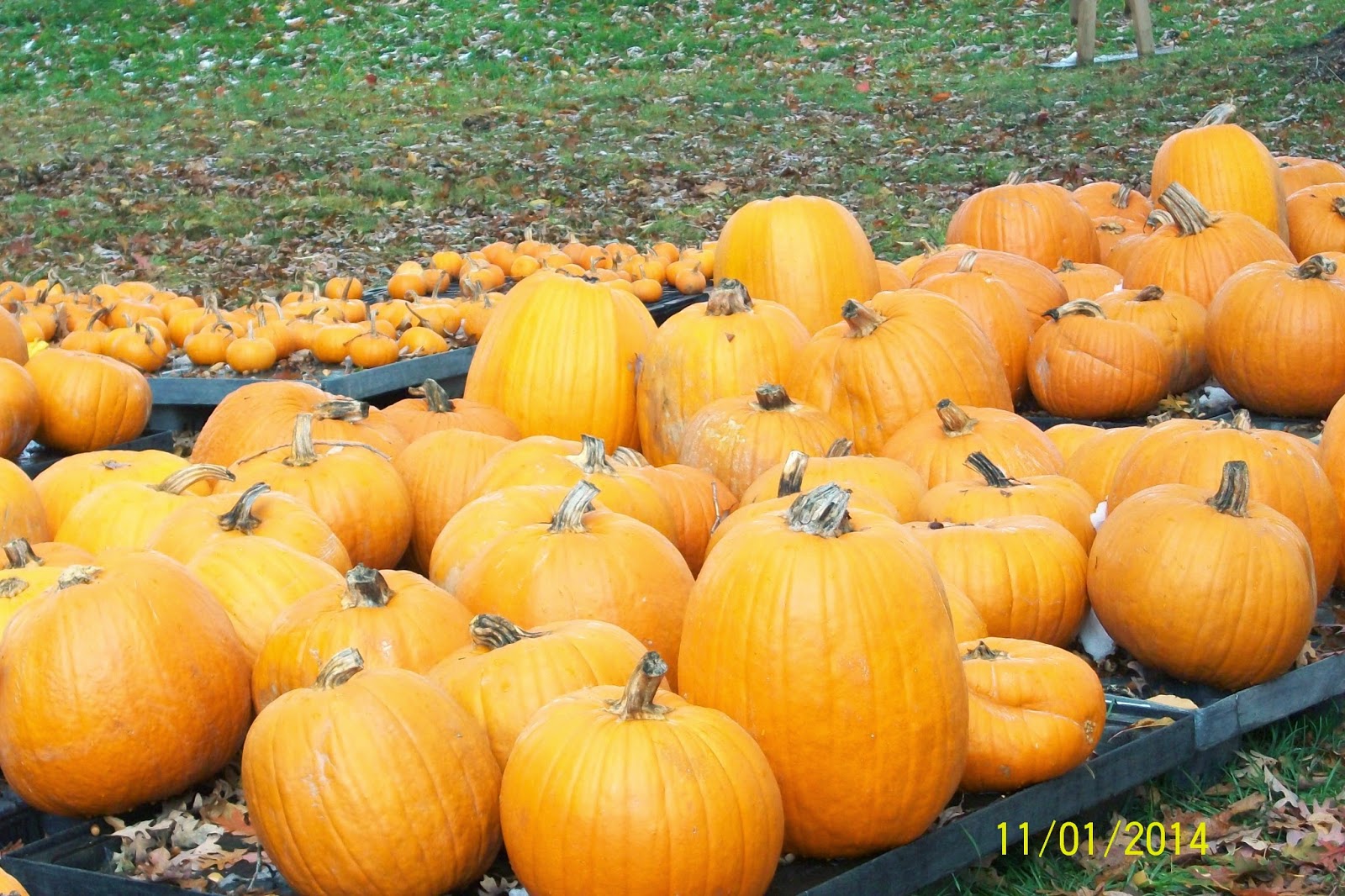 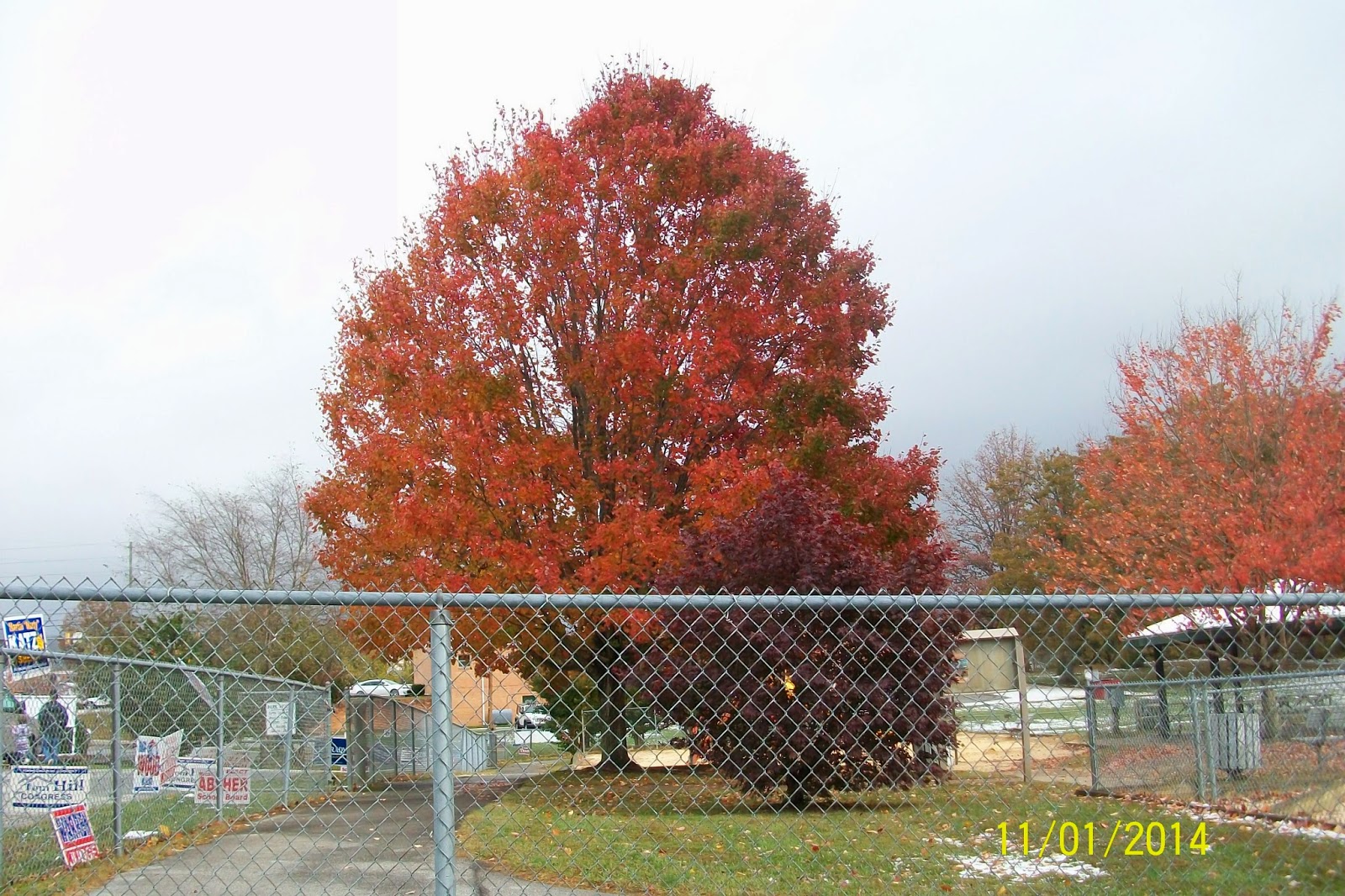 Griffin and I had plans to go on the Blue Ridge Parkway and take lots of gorgeous photos of the brilliant colors of the deciduous trees in the mountains but alas...the snow came on this night and the cold completely killed any chance that anyone had of enjoying a visual delight coupled with occasional oohs and aahs that we partake in each autumn which happens to be my most favorite season all year long. Well I did get these few pics to share not the most picturesque mind you but nonetheless I captured the beauty of the colors.

Due to the scrutiny that one comes under when one decides to homeschool because the very first thing that people remark is, "Oh but he won't get to socialize!" This is the most common misconception of homeschooling for so many reasons. In fact, children who are homeschooled socialize daily with all age groups even their own peers. Children who homeschool learn more living skills at an earlier age than traditional schoolers because we are so active and do more of a variety of things than those in school. We have exercise almost daily such as swimming, Occupational and physical therapy, exercise out of doors, we have math in daily skill building such as paying for things at the store, measuring in cooking, measuring our growth of our bodies and its parts, keeping track of days months and years etc...we read books at home and at the library, follow directions on boxes for cooking, etc..all these things and so much more than this is done on a daily basis that we didn't do when he was in school. He socializes with adults and kids alike in stores , we are planning on going to church which has a special needs Sunday school, we are going to go to autism groups several times a month, and homeschool groups have specific times and days in which they get together for activities, study, and play. People just don't stop to think that if homeschooling was so bad for kids then why would parents do it? To deprive their children of learning in life or to be lazy???? Pardon me but homeschooling parents are far from depriving their children because we do it because we want the BEST for our children and conventional schooling was either hurting our children or not giving them what they needed. Griffin was having such severe anxiety that for several years he wasn't sleeping at night because his anxiety about what was going on at school was keeping him awake then he would also get up in the middle of the night causing him to sleep half the day away missing most of school. Now he sleeps just fine with a few days now and then getting up super early because I put him to bed too early but he makes it through the day just fine. He now has zero anxiety and functions far better and has no meltdowns any longer. And homeschooling is far from a parent trying to be lazy! Quite the contrary! Homeschooling takes a lot of work and dedication. But we do it because we love our children and want the best for them not because we are avoiding anything. People who think this are just plain ignorant and do nothing to improve their minds or make an effort to broaden their minds. Frankly I have no patience for such ignorance!

Before I work myself into a frenzy, I must briefly add to a reader who has been interested in publishing an article on my blog through her site: Healthline, I have every intention in publishing it but my health has been quite poor and I just haven't sat down long enough at the computer to read the article then transferring it to my blog. Sorry but perhaps soon.

This is where I transition to my least favorite topic of my poor health. In July my blood pressure spiked way up and has not gone down since regardless of three medications one of which I take twice a day. I had been feeling really really sick for such a long time that I didn't take my health seriously because I was so focused on taking care of Griffin . Not only that but I attributed my extreme fatigue and other symptoms to my Fibromyalgia so I just suffered. To make this short I finally had my blood sugar checked and it was 384, got that under control with a new medicine yet my bp was still high so the doctor has ordered an ultrasound on my renal system because she thinks that I might have Renal Artery Stenosis. I don't know if that is it because I don't know if it causes pain or not but the big C word came to mind too. Not scared though just want to know what it is so that we can take care of it.

God is Good and We are Blessed!
Posted by Lora at 11:58 AM 1 comment: Links to this post