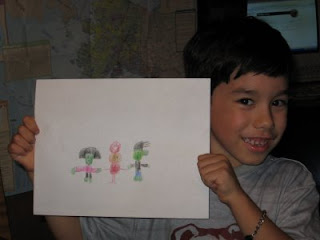 This is my new blog, you will find there the first of many reports that his teacher sent home with him and it will be apparent that she was punishing him for his autistic tendencies and that she didn't know what she was doing. If you disagree, feel free to leave a comment, especially if you think that I am way off base and that there is no foundation for seeing things the way that I have.

Griffin is doing great with homeschooling and is learning a great deal. I have found ways to get him to work on his handwriting so he has improved a great deal and he doesn't seem to mind or he is so excited about the content of what he is writing so much that he simply doesn't pay attention to that part. What I do is to get him to write in his journal what he wants as a reward for when he gets enough stickers for doing various tasks. So, he writes all about it, forming his own sentences (and learning about punctuation) and often he will write far more than I thought that he might. Half the page is blank so on top he draws and colors, with colored pencils, exactly what he wishes for. His artwork is so advanced and it is the only thing that he attends to without distraction so I make sure that he gets to do some each day whether it is task related or just for fun. Since he has access to lots of paper then usually he will just sit down and start drawing on his own, I have saved much of it and it is already apparent that there is a rapid progression in his abilities. Since I have been an artist for nearly my entire life, I am pretty excited about Griffin's love for drawing and painting and for what the future might hold.

Griffin started taking Abilify about a month ago and it has helped him tremendously, he complains of being tired quite often but it is usually when he doesn't want to do something (imagine that!). When he has free time he is running around, swinging, and jumping on the trampoline but he is far more stable than I have ever seen him and his meltdowns are non-existent now! He will start to get upset but it is very short lived and it is far easier to talk to him and to get him to cooperate and comply. He doesn't have the same "manic" energy anymore and it is not necessary to try to get him to calm down therefore he attends much better during most of his activities/tasks.

I had a procedure done on my uvula and since it was done with a laser it gave me second degree burns in my throat so I had a week of intense pain, insomnia, and feeling like there was never going to be an end to it but I am nearly healed now. The ENT told me that if the problem occurs again then I will have to have my tonsils out..............not looking forward to that because I believe that it is going to turn out that way things look right now (it is already happening again). I am due to see him again in a month so I will keep you posted.

Loving this weather, it is my favorite time of year no matter where I have lived throughout the years, just wish that it lasted longer. I hope to catch up on reading blogs and letting you all know that I am thinking of you, I do miss my blogging friends and would love to know how you are doing.
Posted by Lora at 4:30 PM 2 comments: Links to this post

I have restrained myself up until now and NO MORE will I hold back! The truth will be known to all about how my son and I were treated as he went to his school that is located in upstate SC. I would add which area we live in but I do not feel safe doing that at this time. However, I plan to start a blog specifically on the topic of how this school mistreated my son and took advantage of me, my own disabilities, and how I was bullied into taking an entry off of this blog and the only reason I did it was because I was terrified of retaliation.

It is my hope that everyone in the public school system reads this and especially the new blog because the truth needs to be exposed and this is my only avenue and the last resort because apparently the school district and even the assistant superintendent admits to telling the principal to tell me to take my entry off of the blog! That is an outrage and I will not stand for it and I am tired of sitting around and doing nothing about it. I am protected by the first amendment and there is not a damn thing that they can do about it....................so read on people and I hope that you are all squirming in your seats as you get upset and perhaps you will wish that you had done things differently and that you had treated my son and I with more respect and that you had followed the laws, the federal laws more closely. You know damn well that you broke laws, especially the teacher who was such a coward that she couldn't even talk to me! Yes, you! You didn't even follow your own policies and procedures...........such as, having the parent/teacher conferences that you were supposed to have after my son got a "red" light on his daily report. What is your lousy explanation for that? You are an EMR and you are not even qualified to teach a child with autism. You punished my child for being autistic and I plan to make public all the reports that you sent home so that they all can see how you wrote negative reports nearly every single day and even though I begged you to write something positive you absolutely refused.

I know what kind of gossip goes on with all of you who seem to not know how to mind your own damn business and seem to think that you can judge people and then treat their children accordingly. You may think that because I was kind that I was stupid as well. You made the major mistake to think that my kindness was weakness. I have seen more of life than all of you combined and traveled all over the world and never...............NEVER have I seen such pitiful people who desperately need a life instead of putting your nose in mine and thinking that my son didn't deserve to be treated with kindness and respect.

Through this blog and through the new blog I am going to do everything in my power to get the truth out there and let people know what you are all about. You may all stick together which is fine but it will not help you now, there is nothing that one or all of you can do to stop me!!!!!!!!!!!!!! Who is in charge now? You will regret all that you have done and you all will be exposed.

Have you figured out that I am ONE ANGRY MOTHER yet? Please people, stay tuned, it will provide you with plenty to gossip about and this time the source of the gossip will be YOU! I cannot wait for you to read my new blog and to be haunted by your handiwork. I am excited for everyone to see the papers that my son was sent home with and all that he was punished for...........such as, for being autistic! I hope that you realize that I have tons of readers and my new blog will have just as many if not more due to my efforts to make it so.

You all have miserably failed my son and he lost an entire year of education and learning skills and perhaps he suffered in your "care" because of his mistreatment. Paybacks are hell people!!!!
Posted by Lora at 6:52 PM 6 comments: Links to this post