Griffin's First Time On a Bike 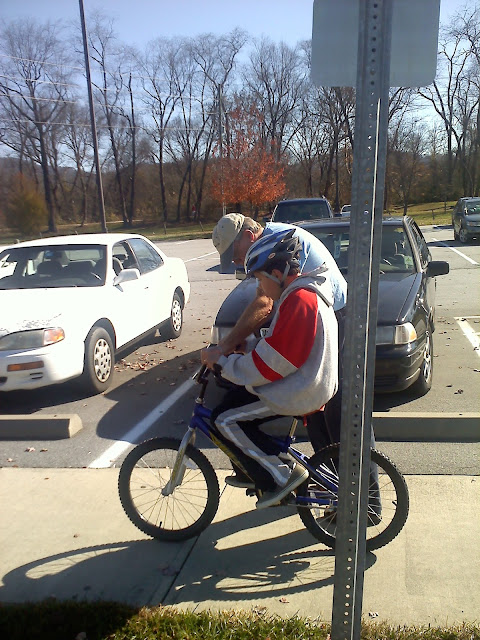 Jim, Griffin's respite provider, helped him learn how to ride a bike yesterday however Griffin didn't like it very much the first time around. He tried it on the grass first just in case he fell off as I had asked him to but the darn seat was too small and hard for him and it hurt his bottom so then they moved to the sidewalk where he didn't complain and went much further. Jim is not going to be here for the next two Saturdays so in the meantime I will have the old bicycle seat from my bike put on Griffin's bike, which I should have done already anyhow but of course hindsight is 20/20 I didn't know that it would have hurt him so much, but then again I don't know if the weather will be nice enough by the time he returns to ride the bike nor do I know if Griffin will want to do it. But I will have the seat put on just in case, it will be worth the cost, I think that I am still a member at REI so maybe it won't even cost me to have it done.

I had Griffin fingerprinted on Friday at the police station by a police officer who was so very nice and Griffin really liked him. I have a Kidz ID sheet that has fingerprinting, photo, and dental records to have on hand just in case he goes missing.....God forbid!!!! But he does run off in the store and scare the hell out of me all the time, he goes out of sight and I have to call out to him loudly and sometimes he doesn't answer me. I am so afraid that he is going to be lured in by someone because he is so trusting of strangers. But I have already written about that I don't need to go there again. You get the picture.

Griffin is supposed to go on a field trip to the symphony on the 14th, I hope that it goes well and that he enjoys it, I hope that he sits still for it or that if he feels like dancing he does so quietly in the aisles without disturbing anyone else. I don't know if this is going to be just for the kids or if the symphony is playing for a full audience but the teachers have their work cut out for them with Griffin I think......hopefully I am wrong.

My friend Vicky, who is also Griffin's Godmother, talked to me about what I am going through emotionally and she was so supportive of me and so understanding like nobody else other than my friend Nina who was there for me too when I reached out to her. Vicky used the analogy that I walk in high heels no matter where I go, no matter what terrain...ice, snow, mud, rocks, and nobody has walked in those high heels like I have nobody has felt the pain of walking in those high heels every day. She said that even though I feel shame for the feelings I have that I should not because I am a good mother and even though I do not hear it enough that it doesn't mean that I am not. Nina told me that even though she doesn't have children now that when she does she wants to be a mother just like me.....that made me feel so good inside! I have known her since Griffin was born and we have been through a lot together so she knows me well.

I don't have but a few friends  and I don't talk to them often because I prefer to be alone but my friends are good people and I believe that they would do anything for me even though they don't call me very often. They don't read my blog but I guess they are just busy and it is not of interest to them but I understand and I do not judge them for it I love them all the same. Sometimes I feel lonely when they do not return my calls and do not seem to have time for me but I try to not take it personally.  I KNOW I AM WEIRD!
Posted by Lora at 11:30 AM

You have written a beautiful tribute to all you mention. You have awesome friends in your lives. Griffin is so lucky to have you for his Momma.
Congratulations Griffin on learning to ride your bike!

Sorry that you're going through a difficult patch but delighted that Griffin is learning to ride a bike :)