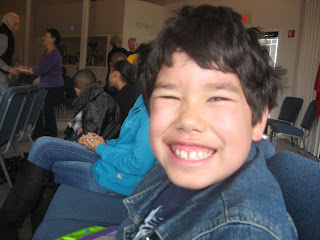 Griffin had a class the other day on puberty but I am not too sure how much he picked up on it because he didn't want to discuss it with me. I am hoping that when we go to see Paul his LCSW on the 6th that he will open up about it and express some of what he has learned and feeling about it. Maybe he will feel more comfortable discussing it with a man I don't know.

I do know that I am feeling a bit anxious about it even though he has shown no signs of it so far I know that it is coming soon and I have to be ready for it like it or not. I have noticed that my attitude towards him has been changing and that I have been expecting him to do more for himself and I expect him to be more independent. I am guilty of not spending as much time with him as I feel that I should but then again when I try he tells me that he wants space so I am left to wonder why I even beat myself up over it in the first place. He is autistic and I can only bond with him so much, I have tried over the years and we have grown close because we are both so affectionate and snuggle at night but sometimes I think that there has to be a line drawn and I have to realize that this disorder keeps us at a distance to a certain degree.

There is no small talk, there is no play time, and when we are in the same room together we do our separate activities and I have to live with that without guilt......IT'S NOT MY FAULT! This is something that I have had to tell myself since the day he was diagnosed and isn't it strange that I am still saying that? It is ironic because I have the page on Facebook Single Moms Raising Autistic Sons and I support moms all the time and tell them how they are strong and how I admire what they are doing for their sons that what they are doing is the greatest feat in all the universe, and how their son is worth every moment and every effort...to just hang in there and disregard the negativity of others. But I don't find those words for myself because of the guilt that I have that autism often brings.

I know that autism is not my fault because I am an intelligent human being and even that gnawing guilt will not get the best of me that has been there since the diagnosis....you all know it whether you still have it or not. I never went through the denial phase when Griffin had autism signs and symptoms, I went right away to get help and got Early Intervention at 15 months but did that alive me of the guilt portion of the picture? I think that all autism parents go through it but at different times and I think that I am just now going through mine....as a delayed reaction if you will....some nine years later. It is not as though I have a broken heart and/or that I am disappointed that I have an autistic child all of a sudden, it's just that I am having a hard time coping with the weight of the situation and handling the responsibilities that come with it but of course I have to. This is why I anxiety levels have risen and that is something else I have to cope with.


I just hope that no matter what Griffin and I will continue to grow close through puberty, that we will snuggle and be affectionate and bond regardless of his raging hormones and mood swings. I adore Griffin, he is my universe and even when we are not talking or playing I feel my love for him and hope that he still connects with me.

He will always connect with you, but it may be different that's all, hoping it will still be good x