The Latest On My Knee 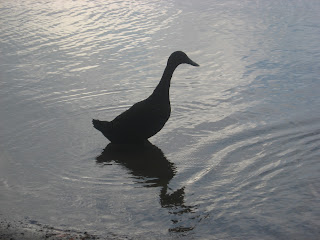 This is an Black Indian Runner Duck and I just love how the picture came out so I had to add it to the post.

My knee got infected really bad and I had to go to the doctor yesterday, it was so bad that the doctor put me on two antibiotics one that I take twice a day and one that I take four times a day and then he put me on strict orders to stay off my feet until Thursday or until the redness and swelling went down considerably or else it would move into the joint and if that happened then he would have to do surgery again to clean it out. The doctor said that it was extremely rare in an arthroscopic surgery to get infection but leave it to me to be that 1%. It is getting easier to bend it and to walk so the antibiotics are beginning to take effect I guess.

The pain is pretty bad and I can't take the meds for it while I driving or while Griffin is home because it usually makes me sleepy but that's okay because I have a pretty high tolerance for pain. I have had worse and others have it worse than me like my dad, Aunt Patty, Aunt Gail, and Charlie just to name a few. So I can't complain.

My neighbor Nikki has helped me a lot, she did some housework yesterday for me and brought over some food for me so I didn't have to get off the couch. Then when Griffin came home from school she prepared snacks for him which he refused and then had a tantrum, he tends to do that when I am feeling bad, he takes advantage of the fact that I can't get off the couch. That is what he did the other day when mom was here. Nikki handled it really well and helped me send him to his room because he hit me and ran away. I did talk to him afterwards about his day to see if there was something bothering him from earlier that day and he couldn't really come up with anything specific. I think that maybe he is just sensitive about me being "sick" and not feeling well and up to par even though I do not tell him that I am sick. I just told him to not touch my knee because the day after my surgery we were snuggling and he bumped into it and I screamed (of course) and then he figured it out.

Griffin had a rough morning but I think that it was because he was so hungry because he was talking about that while he was whining and screaming. I gave him some yogurt because it was quick and has some protein and relatively filling at least until he gets to school for breakfast and hopefully it will be a good breakfast.

I e-mailed his music teacher and asked her how he was doing and she said that she was having to help him with his finger placement on his recorder, but doesn't she have to with any of the kids? And he needs help remembering his music folder but that she is going to assign him a buddy who can help him bring the folder to class. She said that otherwise he is doing well so I guess that he is getting along well with the other kids just fine. I am wishing now that I had asked her some specific questions but instead I just asked her to describe in a couple of sentences how he is doing.