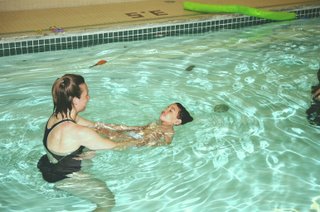 Griffin is in his Tuesday O.T. at the pool and he is really relaxed and trusts Gayle completely, He doesn't even mind when he accidently goes underwater even if he is coughing. I am so proud of him and of how great he's been doing. Thanks to Gayle for doing such an incredible job with Griffin and for being so patient and compassionate in dealing with him. He has grown in leaps and bounds since he has been working with her. There are so many different ways in which he has excelled, one of which is while he is in the water. At home he has shown me that his self help skills are improving greatly and needs little motivation to get things done. Griffin needs only to be asked once to do something such as with cleaning up and he happily complies. He is growing up so fast. 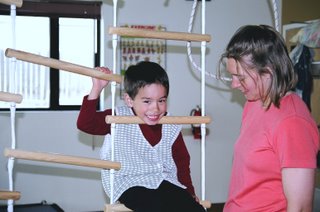 This is Griffin in O.T. with Gayle and you can tell that he is having a great time which is almost always the case, it is rare that he doesn't want to cooperate with her. Gayle is so great with him and seems to know exactly how to deal with Griffin so that he has fun and learns at the same time. Here he is kind of goofing off on the rope ladder by sitting down and taking a break but he loves climbing on it and it is really good for his gross motor skills.

I'm betting Griffin can already outmaneuver me in water, Lora. He can probably get up and down the rope ladder quicker too. (Maybe I'd best re-learn some stuff before I really start feelin' old and creaky.) And I still say he gets the sunny disposition from his mom.

Look at that smile! Now there's a smile that will light up the whole room! Gayle sounds just wonderful:)
Mr.Ornery is right on, Griffin has the sunniest disposition and I too am willing to bet he get's it from his Mommy. Super Mommy and Super Kiddo!

No matter what Griffin is doing if he is not smiling he will be soon. They do grow up fast but that's the way it's suppose to be, so we can enjoy each age and come up with all these great photos and memories. Keep up the good work Griffin.

He does look like he is having a great time!

I've been thinking about you and Griffin every time Conor and I go into the pool. What is the OT in the pool for? Is it to improve gross motor skills? To teach him to swim? To help with sensory issues? All of the above? I'm really interested!

Happy to see that big smile on Griffin's face. :-)

The pool is for both teaching him to swim and gross motor skills. Gayle addresses the sensory issues at the clinic on Fridays whereas swimming is on Tuesdays. She also deals with the fine motor aspect in the pool by using certain toys to play with in the water like squirt toys and graping at tiny little fish. It is amazing what can be accomplished in the water.Gayle also uses this leg weight that she puts on one of his legs that helps him with the proprioceptive which I never would have guessed but she said that it helps him to feel/understand where his body is in the water. I hope that I have answered your questions and that maybe this info is helpful. Hugs to you and Conor!

hey, Griffin is a little stud-muffin!!.....he is quite the guy!
So glad that he has therapists who work so well with him!