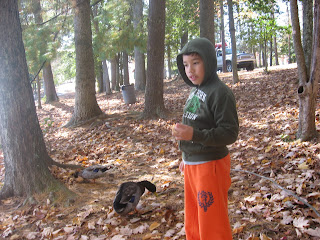 I went to see Griffin's psychologist yesterday and I brought up something that my sister and I had discussed on Thanksgiving...Griffin's self esteem. I had mentioned to her that Griffin generally doesn't like to be praised and she said that she thinks that it is because he has low self-esteem. I hadn't thought of it that way, I just thought that maybe it was the autism but I still praised him anyhow. He tells me to stop when I tell him "good job" or "way to go" so I just don't make a big deal out of it. So at the psychologist's office I tell him that I think that he may have low self-esteem and the doctor told me that if he does then all I can do is to make sure that I brag on him when he is around those he cares about so that it will sink in and that self-esteem had to come from inside Griffin. He said that if I wanted to get a second opinion from another doctor about it that I was welcome because there are so many different points of view on the subject.

What do you think? Do you think that it could be the autism or does he really have low self-esteem in your opinion? I worry that I am doing something wrong with him that is causing this and I don't know what to do.
Posted by Lora at 8:24 AM

Although I don't "get it" either...my son was the same way. Praise would inevitably lead to screams and possibly meltdowns. My best bet was to praise him very non-chalantly. A thumbs up with no accompanying facial charisma. An almost dismissive "good job", or casual "oh, that rocks". As the years go by, he is getting better at accepting praise, but still does not like a big deal to be made. Bottom line, I don't think it's self esteem. I used to think it was the over-exaggerated facial expressions (check out how your face looks without the words in the mirror- creepy), or how the voice takes on that "fakey" unnatural tone when giving mega-praise. Our kids crave routine. Rigidity. Normalcy. When they see our faces/hear our voices all contorted- I tend to think it kinda freaks em out for a minute. I don't know if that's across the board, or just with my kid. All I know is you ain't alone, sistah! :)

It MUST be an autism thing. Cody kinda does the same thing, but only if I make a HUGE deal out of whatever he's done. He's usually okay if we tone it down (a simple "goob job")OR make it silly (Woot! Woot!).

I too worry that I am sometimes doing things wrong but we can only do our best. If we make a mistake, we learn from it....or atleast that's what I tell myself. I wish I had better advice for you. You are doing an incredible job and Griffin is a fantastic boy and very lucky to have such a loving and caring mommy!